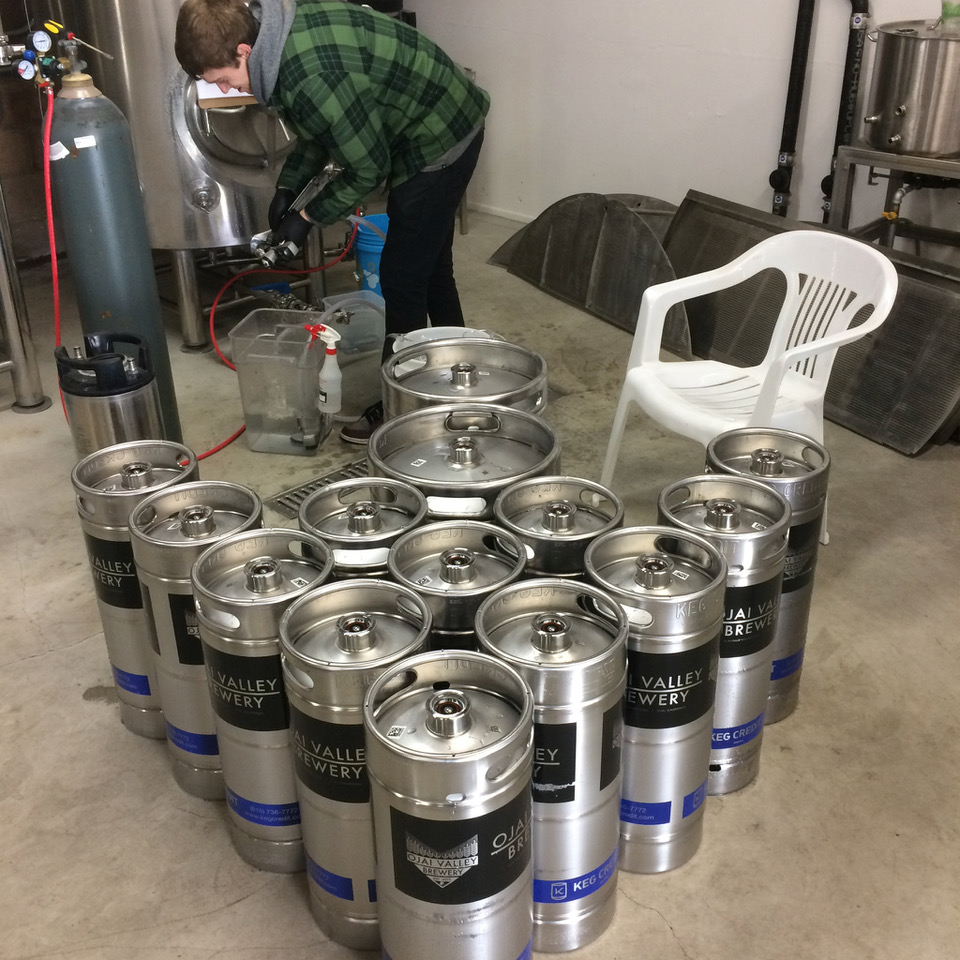 Immediately after Jeremy Haffner’s Ojai Valley Brewery opened, his beer was coveted and picked up by some prestigious venues.  “We’d only been open for three months,” Haffner recalls, “and we were already at the Ojai Valley Inn, and owners from a couple of restaurants from Los Angeles started coming up for kegs.”  And, of course, the beer is carried at Azu, his family’s restaurant.

In part, it was his restaurant experience that provided impetus for his new beer-brewing venture.  Following a career as historical researcher with the History Channel, he began a career as a chef. But it was in conjunction with his music, that he discovered craft beer.    “I was playing music in Europe, and I fell in love with the craft beers there.  When I came home, I experimented with beer making with some friends, and one of them inspired me to take a course.  I went from home brewing to commercial brewing.”

He also learned that he didn’t want to follow certain beer-making rules.  “There is a certain dogma. There are rules, and you’re supposed to follow them, but we don’t do that at Ojai Valley Brewery.”

The impetus for making beer his own way was, in part, his hometown.  “The Ojai valley has been a magnet for people of revolutionary thought processes for a hundred years. Charlie Chaplain, Aldus Huxley, Beatrice Wood. What we have been doing here is moving away from dogma.”

To accomplish this goal, creating a line of innovative locally-connected products, Haffner uses local products.  “We are using local chaparral herbs in concert with, and at times in place of, hops, for flavoring and bittering. We are using special herbs, flowers, fruits, and spices sourced from our local Ojai farms to create subtle flavors that blend together to create a unity of flavor; a whole greater than the sum of its parts.”

These subtle flavors appeal to many of our senses, in addition to taste, including our sense of smell.  “We experience the scents of our local mountains, the perfume of our blooming orchards.  The fragrance can be like hiking up Cozy Dell Trail.”

Visually, Ojai Valley Brewery beers are equally as exciting.  “We actually have a white pixie beer, from our local pixie tangerine flowers,” Haffner says. “It’s a white ale, with the local orchard flowers and pixie zest.  I made this for people who may not like beer.”  At the other end of the visualization spectrum, he creates a jet black beer, Arbolada.  “This is jet black, a low residual sugar beer, meaning it is dry, and makes it better for drinking in hot weather.”

“There are so many beautiful things in the hills here,” Haffner says.  “It’s like harkening back to a time when people had more latitude to make beer about the surroundings where it’s made.  Even the water here makes a very specific type of beer.  These beers are distinctly from Ojai.”

Haffner’s plans for Ojai Valley Brewery’s future include even more distinctly Ojai beers.  “We’re getting ready to brew the Yerba Santa version of our Chaparral series of beers. Yerba Santa is an herbaceous plant the Chumash used to chew on.  Part of my reason for doing this is to reach out to everyone who lives here now, and even represent everyone who has lived in the Ojai Valley before.”

To try these beers, visit The Ojai Valley Brewery Tap Room at Azu Restaurant, and Azu’s back patio Bier Garten on weekends.