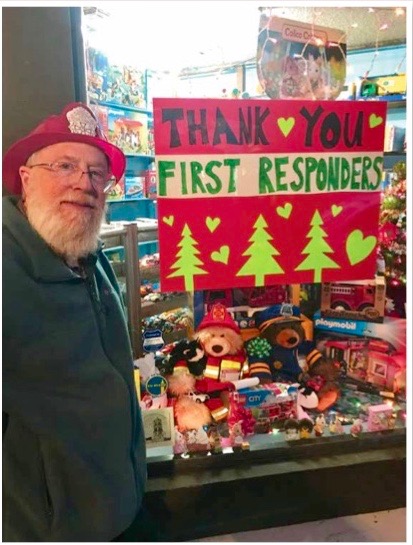 The 2017 holidays are over, but here in the Ojai Valley, it could be said that Santa and Mrs. Claus reside all year long, Joe and Lilly Barthelemy, owners of Serendipity Toys.

Joe Barthelemy actually does hail from up north, not quite the North Pole, but San Francisco.        “I was born in San Francisco by Golden Gate Park in the 60s,” he says. “I attended UC Berkeley and got a grad degree in engineering.” He went to work in Ventura, and the couple lived on Ventura Avenue. “It was crowded and noisy, “he recalls.  “So, we wound up in Ojai, where our son was already at Monica Ross school.”

They loved the community, but Lilly Barthelemy noticed that something was missing. “In 1979, my wife decided one night, ‘Ojai needs a toy store.’ We had a two-year-old, and it was difficult to get toys.”  They solved the problem, opening Serendipity Toys, featuring what their website refers to as “high quality toys that would engage children in constructive play.”  He explains, “We like to carry toys that are more traditional, but also safe. A lot of Rubik’s Cubes and brain teaser games.” There are also plenty of puzzles, craft kits and books, and “old fashioned” toys, for which people travel great distances.  “We get people from Los Angeles who come up for Christmas because they can buy a slinky, paddle balls, old fashioned toys you can’t find anymore.”

When Barthelemy retired from engineering, Serendipity, became his full time endeavor too, alongside Lilly, and since the store’s inception, the couple’s work has involved helping others.  “It started at our store when there were a number of struggling families living at Foster Park,” he explains. “So, sheriff’s deputies asked if we could give discounts.  We gave shopping bags full of things.” They thereby established a trend for more formalized giving, gift and food baskets, administered by Help of Ojai.

Another of the Barthelemy’s efforts in 1991 evokes a true “How the Grinch Stole Christmas/Santa and Mrs. Claus-to-the-rescue” scenario, when, again, they received an official call, this time from a police dispatcher on at 11 p.m., December 24.  A local family with seven children had been robbed, and the Barthelemy’s were asked if they could help.  “Even the Christmas gifts under the tree were stolen,” Bartolome says. “So, we opened about 11:30 at night.” At their store, the couple played music, helped the parents select gifts and even gift wrapped.

Providing an update, now, he says, “We haven’t done anything quite that dramatic since then, but we do help people who are short.  We also donate to schools and events.”

Helping is a lifestyle for this couple, including when the recent Thomas fire threated the Ojai Valley, when they, themselves, needed help.  “We’re in Wheeler Canyon,” he explains.  “We lost most of the buildings on the property, but not the house.  But we did lose the bridge to the house, so had to find a place to live.” The couple evacuated to relative’s in Goleta, then a hotel, then to Ojai’s Hummingbird Inn. “Then,” he explains, “we moved into a house a customer offered us.”   In spite of their own hardships, the opened Serendipity the moment it was safe to do so, assuring the availability of toys.

The Bartolome’s have served the community in many ways, now across several generations.  “Now parents, even grandparents come in who were kids when we first opened.  Last year was our 38th anniversary.”

Regarding future plans, Barthelme says, “When I retired from engineering, people told me, work as long as it’s still fun.” He adds, “It’s still fun.”